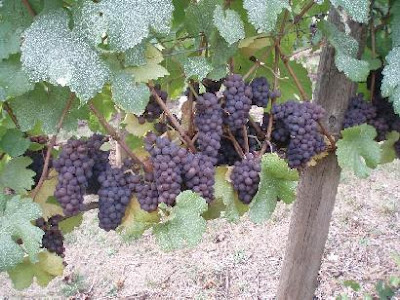 We've been busy.....on Monday, October 12th, we harvested 17.7 tons of Pinot Gris from our 5 acre vineyard..... one of the earliest harvest dates that we've had since planting in 1984. It was a perfect harvest, with cool temperatures and no rain. Rain was predicted for most of the week so we knew that Sunday or Monday were our last shots before the weather changed ( and the dreaded migratory birds appeared). The sugar levels were at 23.5 BRIX and the grape clusters were large and full. The picking crew of 20 arrived at 7:15 am....just as daylight hit the vines. Armed with 5 gallon buckets, they quickly filled the 500 lb wooden totes that were positioned throughout the vineyard, and 6 hours later were finished! The rest of us all had our jobs to do and were finally ready to sit down for a meal of Tuscan bean soup and harvest bread by 7 pm or so. Son Brent helped load the flatbed truck and then drove it 4 times to the winery and back. Husband Fred operated the big rented forklift, loading the truck. Friend and neighbor Roger zipped up and down with our tractor, picking up the individual totes and bringing them down to the staging area. I did a bit of gleaning after the crews were done, with help from both daughter-in-laws and my grandson, but spent most of the day cooking up a storm in the kitchen, and bringing food and drink to keep everyone energized. 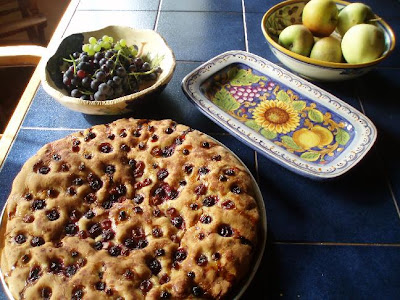 The best part of the day was realizing that we didn't have to take down the bird netting after the harvest this year, (since we never put it up)! Our usual late harvests, near the very end of October, necessitates that we put up bird netting a few weeks before harvest to keep the birds from eating the entire crop.

On Tuesday it appeared that thousands of birds, along with our 5-6 resident deer, were all descending on the vineyard, eager to nibble on the remaining clusters that had been dropped on the ground or left on the vines. There was literally, a symphony of bird calls and excitement in the air as all of the critters rejoiced! Even our big grey-tailed squirrels stopped eating our walnuts long enough to chime in. 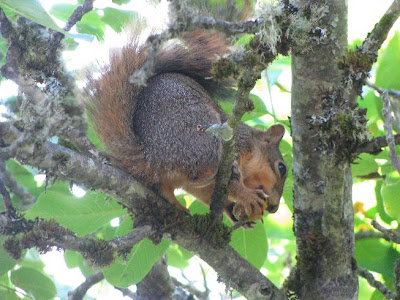 After the harvest, while Fred did the usual clean-up of the totes and buckets, and started the long process of getting everything put away again for the winter, I started to do the garden clean-up....processing the last of the tomatoes and picking the many bucket loads of apples.

The Fall colors have been spectacular this year, stopping me dead in my tracks as I walk around the property. We've also had lots of visitors this Fall.... friends from college and our childhood years on the East Coast, who have come to spend some time with us here at Cloudrest. What a blessing to share memories and adventures together! We love showing off Portland and Oregon's wine country. It pushes us to get out ourselves and explore all the nooks and crannies.... places like the Columbia Gorge, The Chinese Garden and the Pearl District in Portland, and even Hillsboro's Saturday market, where I discovered the best green beans !!

School has started too...I have two Co-op design students this term, and am also taking on a young high school student as part of an internship program. Two landscape designs are also in the early stages, so it appears that keeping busy won't be a problem.