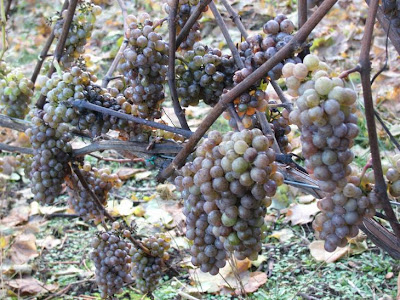 This year, for the first time since we planted our grapes in 1984, we were not able to harvest due to low sugars and a general lack of ripening. We had a very late cool, wet Spring along with a cool Summer. Most vineyards with an elevation over 600-700 feet were in trouble. Every vineyard was a month or more behind schedule on ripening, and since we normally harvest in late October, our window of opportunity was considerably diminished!

We normally put up bird netting since the migratory birds come in mid October and birds love grapes! Many vineyards who don't normally do this because of earlier harvest dates, were forced to net or use canons. By early October we knew we'd be too low in sugars to harvest , so we didn't net. Our sugars only got to a high of 18 BRIX ...not good enough. 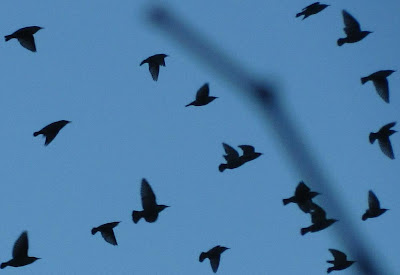 As the leaves in the vineyard turned yellow and then slowly fell off with our first frost, it became more obvious that something this year was different! No nets to remove.....only rows and rows of beautiful, plump grapes! They would normally have turned a deep reddish purple ( veraison ) in September, but even that color change wasn't happening very uniformly. Many clusters were still green or only tinged with purple. The fruit was clean, but not ripening fast enough. 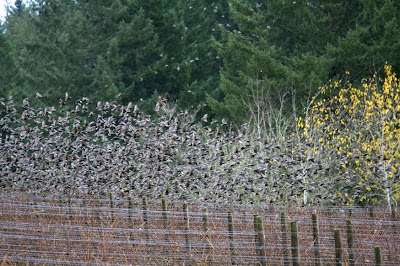 The day after Thanksgiving it happened.....thousands of birds ...clouds of birds ....descended into the vineyard! The noise was deafening. many roosted in the high firs and black walnut trees that ring our 12 acre property. As I write this a day later, they are still here....it may take a few days to eat, what we estimate, are 12-14 tons of grapes! 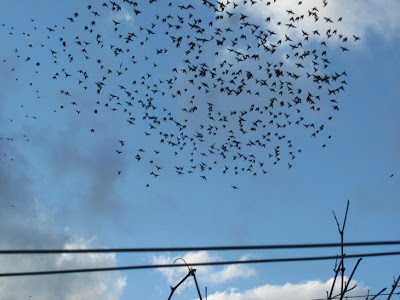 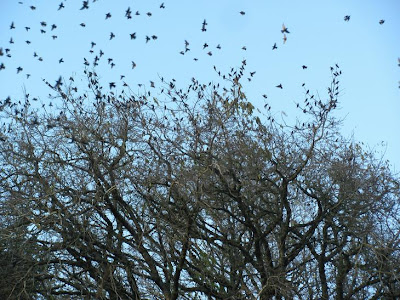 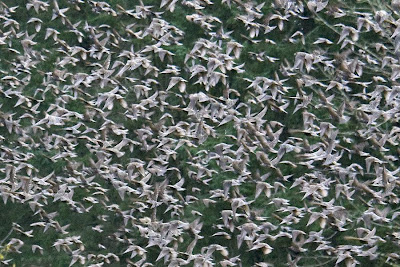 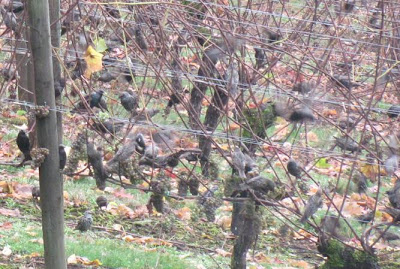 And then the vines were filled with birds.... 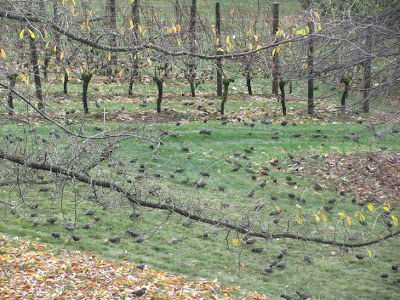 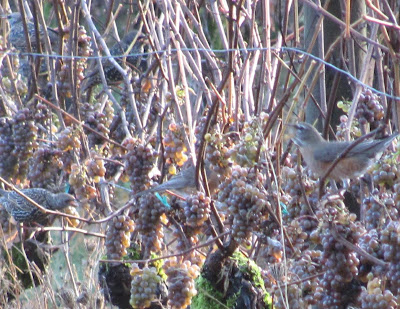 Can you find the birds ( six or more) in this photo? 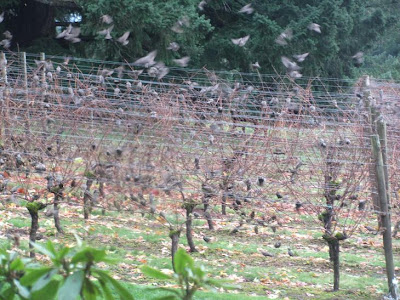 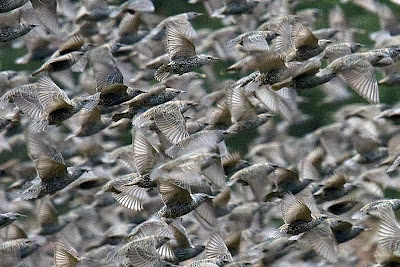 A close-up taken by my husband....looking into the swarm as it passed above the vineyard block!

It is fascinating to watch them swoop and move around in large clouds across the vineyard rows .... they appear to be mostly Starlings, with some orange breasted Robins scattered in the mix. A few hawks have come to observe, causing the large masses of birds to divide and disperse, and then reform again on the other side of the vineyard. 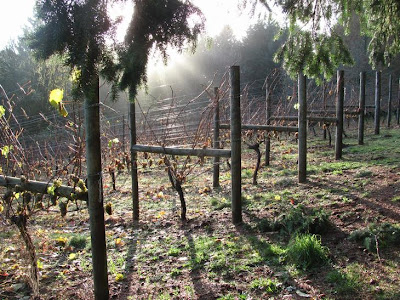 Not just another day in the vineyard!

We just hope that next year we can bring our crop in at the normal 22+ sugar, and that the birds have a short memory!

In the mean time, you can taste Oregon Pinot Gris at www.oakknollwinery.com
Posted by Linda at 7:44 PM No comments: 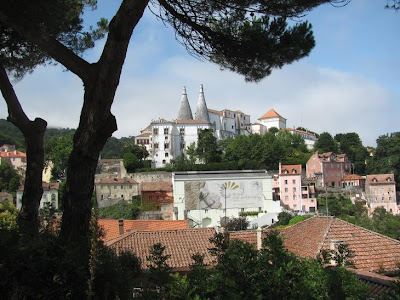 Despite a busy cool Fall with the grapes still lingering on our yellow-leaved vines, my mind still wanders back to a fairy tale day in Portugal in July of this year. On a sunny, warm day we took the train from Lisbon to visit the World Heritage town of Sintra, located in the rugged hills not far North of the city. Walking a short distance from the station we glimpsed the twin towers of the Sintra Palace, otherwise know as ' Madonna's Bra' by the locals!

Walking further up towards the town, along a ravine that appeared to be a town park, we spotted several large 'animals' through the jungle-like foliage. 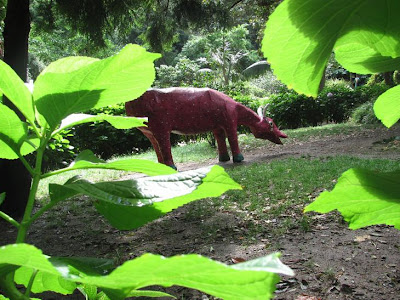 That's when I wished our grand children were with us! Along with the various critters were wonderful lush plantings of hydrangea and agapanthus, along with numerous plants native to Portugal that I wasn't familiar with. 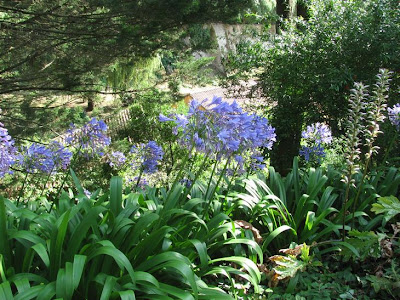 After strolling around the small town of Sintra and getting our bearings, we headed up a steep side street and followed the signs pointing to the Moorish Castle and the wildly bizarre Pena Palace, both located on a steep hillside surrounded by a deep dark woods. From the town, we could see parts of the castle walls emerging from swirls of fog. It felt like we were walking into a fairy tale! 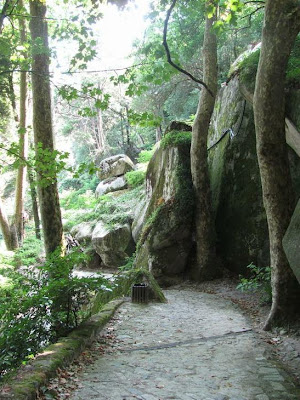 Leaving the streets behind us we found ourselves going through a turn gate at the end of a very steep dead end street .... and were suddenly on a woodland path that meandered for a few miles through large boulders and huge twisted trees! ( a great place to be for Halloween! ) We met few people on the path.... probably due to the fact that most people took tour buses to get to the various sites. Arriving through the woods was waaay better! 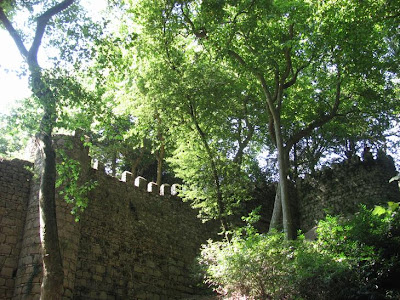 A view of the Moorish Castle walls suddenly appeared before us, as the path skirted around this massive ruin dating back to the 8th century. It fell to the first Portuguese king, Afonso Henriques, in 1147. Stopped here to watch an archeological dig taking place.

Trekking on and upward we finally reached our destination....the Pina Palace, a specimen of Romantic architecture dating back to 1840. It was built 500 meters above sea level by King Ferdinand II on the earlier 16th century ruins of an ancient convent. The meandering structure is a bewildering mix of many styles and ornamentation, with sections that go back to the original 16th century monastery. In later years his son created a huge park around the palace, and modern royals have occupied the Palace through the early 1900's. 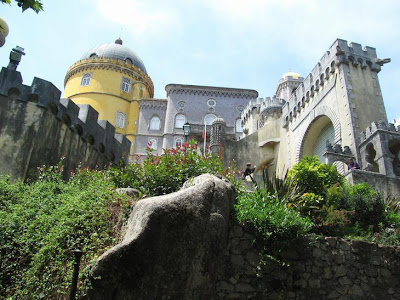 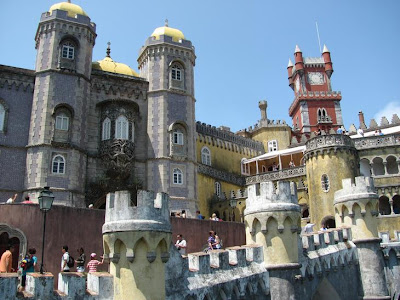 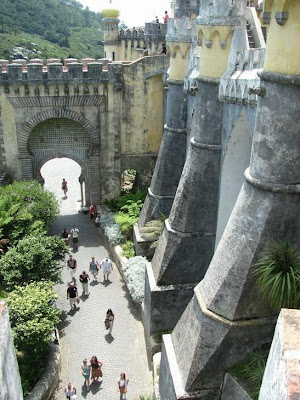 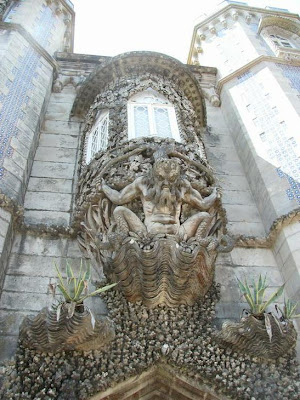 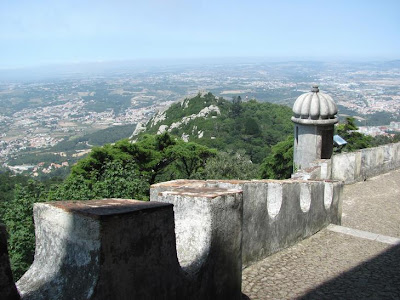 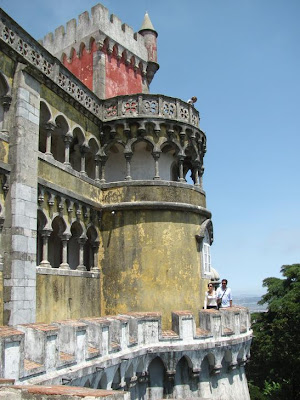 The wonderful muted colors and fanciful Moorish-influenced decorations were amazing! I loved walking the ramparts and seeing the amazing views.  I would also have loved to sketch this place, but it would have required staying there for days ...so my camera captured the moment instead. Many of the interior rooms were furnished so you were able to get a feeling of what life was like for a king at the time. 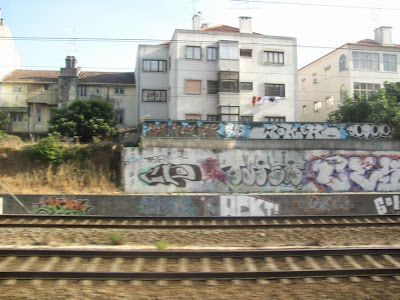 A much easier hike going down, and then a train ride home completed a very interesting day. I snapped numerous photos of endless graffiti that lined the walls along the train tracks! Then....back to Lisbon, land of cobbles, and another journey unfolds. Our last week was spent in the Algarve, along the Southern coast ... to be told in my next installment. 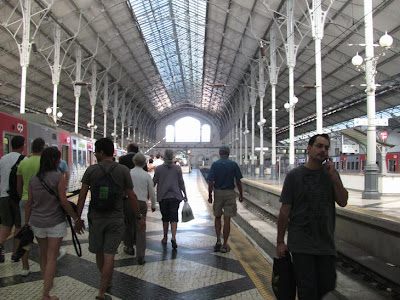