Walking into the New Year.... 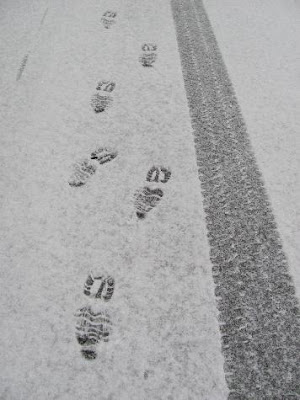 After a week of eating, drinking, and celebrating with friends and family, reality hit when I stood on the scale! So it's off to the gym, or better still...out the door to meet my neighbor, Deb, for a walk along our beautiful rural road. We left just as a few very fluffy snow flakes were aimlessly floating down from the grey sky. Hmmmm...
There had been only a slight indication that snow was in the forecast. During the hour that we were gone the snow steadily increased, and by the time I wandered home, there was close to 2 inches on the ground, with the landscape becoming a magical place. What a gift. We had all been missing the copious amounts of snow that gave us a very white Christmas last year, so it's nice to see a bit of the white stuff while the Christmas decorations are still around. We've been feeling sorry for friends on the East Coast and in the Midwest who had to battle the nasty snow storms that arrived right around Christmas. Snow can certainly be both good and bad! 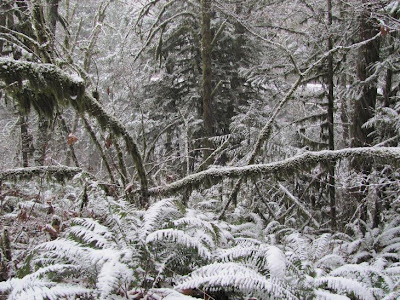 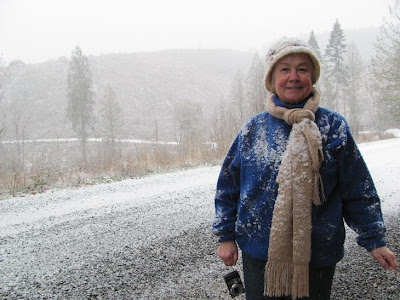 I love the way snow can make ordinary objects totally different....tree branches become arms covered in lichen sleeves, and forested hillsides appear ghostly and surreal. Small ferns pop out into view against the protective trunks of the large firs and cedars. 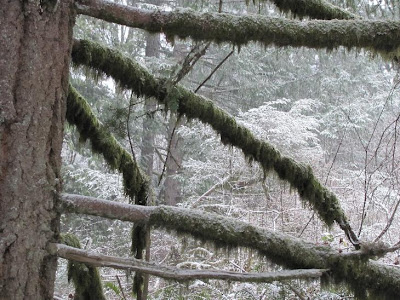 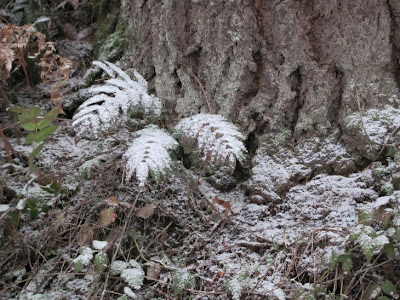 Now as the light fades and every branch on every tree is covered, I can watch the squirrels run from tree to tree, and see the varied footprints of the other assorted critters that share this land with us. There is a 4 inch thick blanket of white covering the ground so I know the deer will soon be emerging from the forest in search of the green leaves that remain exposed under the eaves of our house.

Hopefully the snow will still be around tomorrow so I can take another walk...
Happy New Year!
Posted by Linda at 4:13 PM No comments: 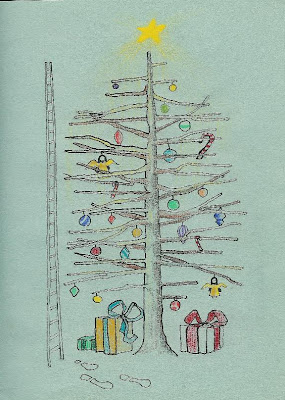 Santa was surprised
to see a tree so bare,
But a star was brightly shining...
In the tree top's hair.
Every branch was gilded.
Every Jewel did shine.
Yes, this tree was different
from any other pine.

From a book on trees that I wrote and illustrated back in 1961, when I was in High School! I titled it 'The Twist of a Twig' and filled it with drawings and poetry. It hardly seems possible that close to 50 years has evolved since then.....and I'm still drawing trees! 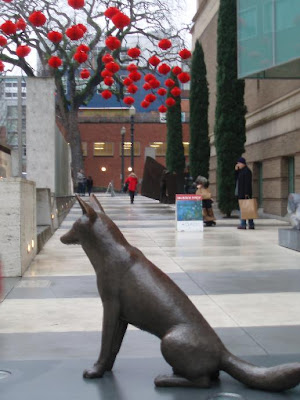 Yesterday my husband and I spent the afternoon wandering around Portland taking photographs. I started out at the Portland Art Museum, which is having a very interesting exhibit on modern Chinese design. After checking out the maze of exhibit rooms and stopping to see what the gift shop had to offer, the adjacent sculpture courtyard turned out to be my favorite spot. Bright red Chinese lanterns appeared to hover over the space....at times giving the illusion of being giant decorations on a large tree across the street. People hurried by, trying to finish up their last minute shopping. The city felt vibrant and alive. 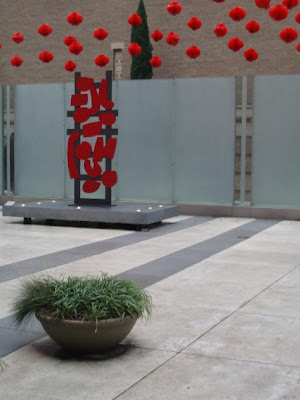 Meeting my husband at Pioneer Courthouse Square where Portland's Christmas tree resides, we lingered there to take more pictures , and as darkness settled in, made our way over to the Williamette River to take night shots from the bridges. The river flows through the city, dividing it East and West. It isn't often that I have the opportunity to walk across any of the many bridges that span the river. I discovered that walking is so much more of a sensory experience! 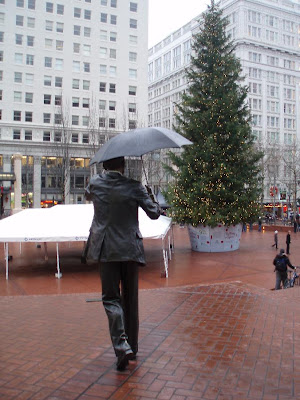 I just have a small Olympus digital camera but my husband has a much more powerful Canon digital with a large lens and tripod. Taking time exposures from the bridge would be a bit of a challenge since the traffic caused the entire structure to shake and vibrate! Just as we settled in to take some shots I noticed a distinct buzzing sound coming from under the sidewalk that carries pedestrians across the bridge. Was it about to collapse? Lights flashed, horns beeped, and crossing gates started to lower as the center section of the bridge started to raise....a large barge was about to go under the bridge! We watched, along with a large crowd of shoppers, joggers, and cyclists who by that time, had gathered at the West end of the bridge. Photos taken at that point resemble abstract paintings composed of numerous bright wiggling lines ! The barge was followed by a single small pleasure boat decorated with Christmas lights....a stray from the Christmas boat procession that is scheduled on various nights the week before Christmas. 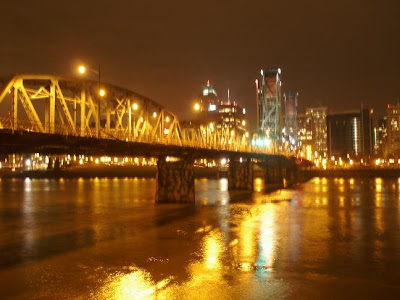 Once we were on the other side of the bridge we found a great overlook on the East side Esplanade that runs along the banks of the river, enabling us to get better 'in focus' shots looking back at the bridge. Portland is a great walking city, and yesterday, on December 19th, it showed us it's best. Last year at this time the 'big snow' was just beginning to fall, and would leave the city with over a foot of snow, but this year it is sparkling in another way. Cheers! 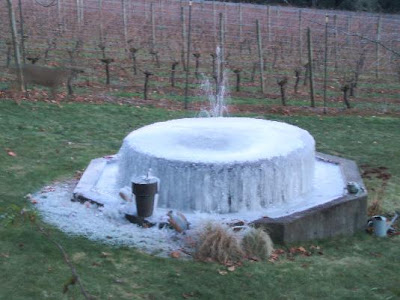 BRRRRRRR!.....It's cold outside! This is looking like a repeat of last year. After a few crisp, sunny days in the upper 30's, that we took advantage of by going on a few bike rides, the weather turned really cold. Around the Portland area, temps below freezing are rare, but this week we've been into single digits. Waking up to 16 degrees is cold enough! We had to act fast and drain our fountain and water pagoda. The photo above was taken just before we turned the water off, and if you look closely in the upper left corner you'll see a deer running at a blurred speed past the vineyard! I didn't notice him until after I took the picture. I am wondering how all the animals are managing. Don't the poor birds get cold? The deer have been seen lately running at a fast pace across our property, as if being chased.....perhaps by a reported cougar that may be in the area. Our hungry squirrel, I am sure, has settled in nicely for the Winter under our hot-tub.... with a good supply of stolen walnuts! 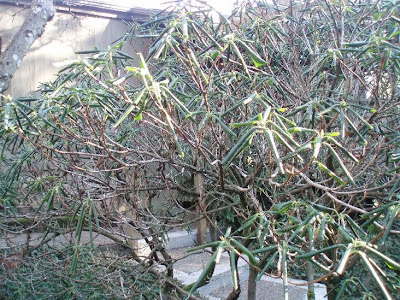 On a quick walk around the house to inspect my garden I discovered that some rhododendrons appeared colder than others! This yellow 'Hotoi ' has curled up it's leaves to the point of looking like a conifer with needles! Interesting that the 'Jean Marie' around the corner looks unchanged.


I'm glad that I managed to haul some of the more tender potted plants into the green house for protection...but I don't look forward to getting the electric bill next month! I have a small heater that keeps the green house at a 'cool '39-40 degrees when the temps dip below that outside.


Aside from trying to stay warm, I've been busy finalizing a landscape design, and preparing for the upcoming holidays. Luckily we put the Christmas tree up early and were able to cut it down....a nine foot Noble Fir, while the weather was both warm and sunny! Since we have been in Oregon, we've never had to buy a tree...started cutting Douglas firs down on our own property and then moved around the neighborhood! We have some small Nobles planted now that should provide some trees in the future. 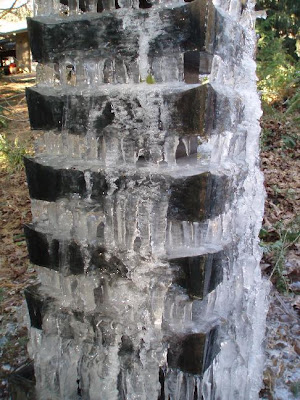 Perhaps I should decorate our new water tower for the animals! We are hoping that once the temperatures moderate and the water can flow again, we won't find that the ice has done any damage. I really miss the sound of the water though! Before bed we usually sit out in our hot-tub, which is located on our deck with the fountain just below. The clear, cold weather has made the stars appear brighter.....and with the outside temps in the teens or lower and the water temp at 104, it's a great experience! But with the fountain frozen solid it's so quiet now............

Wishing everyone a peaceful and happy holiday as we approach another new year!
Posted by Linda at 12:02 PM No comments: